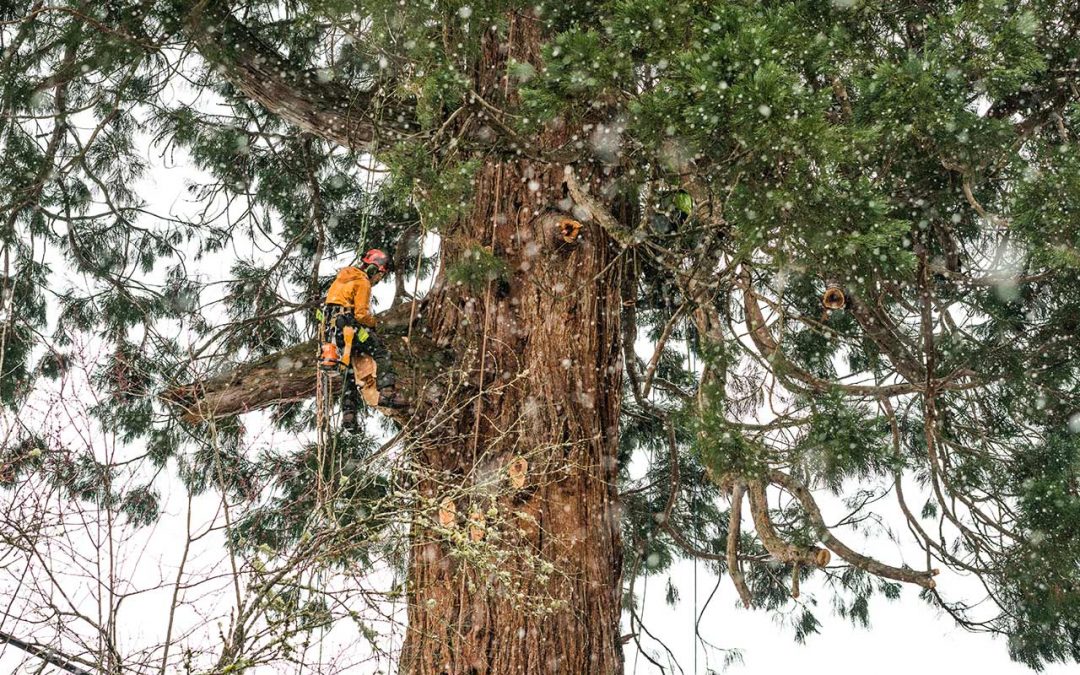 One of the largest trees in the city, it was removed during a multi-day process that involved closing the street for safety reasons and to make room for necessary equipment.

History of the 148-year-old sequoia

Planted in 1870, the sequoia has been part of the Fitzgerald family for 6 generations and they considered it to be a part of the family.  While they loved the tree, it has been the cause of many infrastructure issues over the years, which has only gotten worse as the tree grew larger.

The roots are causing damage to the foundation of the house as well as the sidewalk and street in front of it. After a large limb fell during a recent storm and caused damage to the house, the family knew the time had come to remove the tree before another incident could occur.

A crew from General Tree started by removing the limbs of the giant sequoia on Feb. 20th and 21st.  With the help of a crane and Teupen lift, the trunk was dismantled and removed on March 8th and 9th.

Clint Landon, owner of General Tree Service, was happy that every piece of the wood, brush and debris is going to be re-purposed and used in a multitude of ways.

The limbs and smaller pieces will go to Metro for trail building and the wood chips go to Clean Water Services for trails.

The large pieces of the trunk were being purchased by the City of Forest Grove to be used in a play structure at Rogers Park, which is located right across the street from the sequoia.

The city has been wanting to put in a nature play area to honor two sisters who were killed in a 2013 crash while playing under a pile of leaves.

A significant part of the trunk will be used to create a play structure that will be the centerpiece for the play area that will make up “Anna and Abby’s Yard” memorial playground.

While it may be sad to see such a beautiful tree being taken down, we are happy that the entire sequoia will be used.

As good stewards of the earth, we promote sustainability and being able to repurpose this sequoia for so many good causes, makes us happy.

It is especially fulfilling to know children will be able to play in Anna and Abby’s Yard and enjoy the sequoia for many years to come.